Due to a friend’s leaving night on the Saturday night I had been unable to attend Incheon’s 2-0 victory over Ulsan and so it was , with Magpie Brewery’s Evil Red Ale still swimming about my head,  I made my way to Suwon to see them take on the league leaders. The weather was pretty bad with it pretty much raining most of the day, but with the number 7000 bus from Sadang Stn stopping right outside the Big bird I felt pretty safe in the knowledge that I’d be able to stay relatively dry. I got to the Big Bird Cafe around 4:45 and ordered the now essential 6 pack of Dry Finish (kind 0f ironic giving the weather). I was joined a few minutes later by @korearacing who had made the trip down earlier after some rather disappointing lunch in Anyang. It was completely by chance that I had chosen to wear my Celtic top and as I sat surrounded in a sea of blue it brought back a few memories from days gone by in Glasgow.

The rain chucking it down in Suwon!

Suwon always seem to be able to draw the fans out no matter what the weather and Sunday was no different, from families to interesting youths shouting “Rangers Boo!”, to the match made in heaven couple of a male Suwon fan and a female Pohang fan. The Big Bird Cafe is a great place to meet and have a few before the game, and I wish more football grounds had somewhere similar although thinking back to my days in Glasgow I’m not sure it would work there!.

As kick-off approached we used the UN approved ‘rock, scissors, paper’ to see who went out in the rain for tickets and who bought another 6 pack. I guess I was pretty smug as @korearacing had to go out in the rain while I stayed indoors in the relative dry and safety of the cafe, although I have to admit that smugness was wiped off my face when he came back and informed me he had bought the tickets off an ajussi in the queue for 1/3 face value.

We soon made our way to the stadium and got seats up the back of the top tier, the World Cup Stadium in Suwon is a great place to watch football, you are pretty close to the pitch and the seat rows are kinda curved so you always seem to have a good view. But for some reason they chose to leave the ends behind the goal uncovered, which doesn’t really make sense. Needless to say both the Pohang fans and the Suwon ‘Ultras’ were going to get drenched if the rain kept up.

No sooner had I cleaned my seat (another annoyance about kleague grounds) than Suwon opened the scoring, there was all of 44secs on the clock when Santos burst through and buried the ball in the back of the Pohang net. The goal surprised everyone in the stadium as I think most people thought it was going to be a tough match with maybe the odd goal. Both Suwon and Pohang looked stunned and for the next 10 mins or so it did look like one of those nights where half the crowd miss the only highlight of the match. Pohang began to come back into the game and you could sense an equalizer was on the cards and in 26 mins Hwang Ji Su obliged. Pohang won a corner and as the ball fell to Hwang on the edge of the box he drilled it low past Jung Sung Ryoung. Pohang were back in the game and looking good. Then came one of the strangest moments in a K-League match this season. After some good Suwon pressure, including a world class save to defy Santos, the referee managed to award a penalty to Pohang for nothing. As the Suwon players protested the referee ran over to consult his linesman, instead of the Pohang player placing the ball on the spot and making it harder for the referee to take back the award he stood looking confused. After a couple of minutes the referee ran back over and awarded Suwon the goal-kick. It was never a penalty in the first place but for a referee to lose face like that, especially in Korea, was inexplicable. I’m guessing he’ll be cleaning the KFA kimchi bins for the next week.

The teams went in 1-1 at HT. The main talking point unfortunately was the phantom penalty and not the pretty decent match unfolding in front of us. As per most K-League teams Suwon have a half-time game where the fans can win prizes, I’ve seen a few variations but this was the best. They basically show a photo of a body part with 3 names and the fan chosen in the crowd had to guess which player it is, the funny thing is even I could recognize that some of the names were made up yet people kept getting them wrong. It was a pretty entertaining distraction and it also allowed the cameramen to practice their world cup bids by scouring the crowd for hot girls. During the proceeds there was a special, albeit 1 minute, guest appearance from old fans favourite Mato. He played for Suwon before I really watched a lot of K-League but my friend informed me that he brought a lot of colour to the game, mainly ‘black and blue’! Mato kicked two balls into the Suwon crowd and waved twice and then left to a roar from the fans, all the while being closely followed by some little Korean dude holding an umbrella above his head. I guess it’s not all glory and riches in the KFA.

As the second half started everyone was looking forward to another decent 45 mins, I don’t think many were expecting what happened tho. Suwon came out like a dog out of trap 6 (as my father used to say), Pohang came out like a dog! The difference in the two teams from the kick-off was obvious, Suwon sensed they could win it. It took 15 mins for Santos to restore the lead and it was a surprise it took that long. He latched onto a deflection on the the corner of the six yard box and although his shot was powerful enough the keeper flapped at it and it ended up in the back of the net. 2-1 Suwon and to be honest there only looked one winner from here. Suwon continued to push forward and Pohang really looked liked a team that just wanted to go home. They did have a chance to draw level towards the end of play but a weak header was easily parried by Jung. Then with 3 mins left a brilliant ball from the left from substitute Kwon Chang Hoon left Roger with the easiest finish he’ll have this season and BANG it was 3-1 Suwon. Amazingly though Suwon weren’t finished there and with 93 mins on the clock Kwon ran onto a clever header and tucked the ball brilliantly beyond Kim to make it 4-1 Suwon. An emphatic and deserved victory over the league leaders was secured. 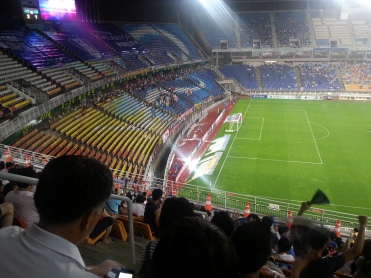 From rain to a thrashing! It wasn’t a good night for Pohang fans!

The result sees Pohang drop down to 2nd in the table behind Jeonbuk and also sees Suwon jump to 3rd 1pt ahead of Jeju. On this kind of home form it’s going to take a huge effort for anyone to knock them out of the top 6. It is a trip away to Jeonbuk next for Suwon and a victory there would see them them level at the top. Pohang face Seongnam at home and they will want to bounce back as soon as possible. For me its a short trip to Seoul World Cup stadium to see Seoul v Ulsan.