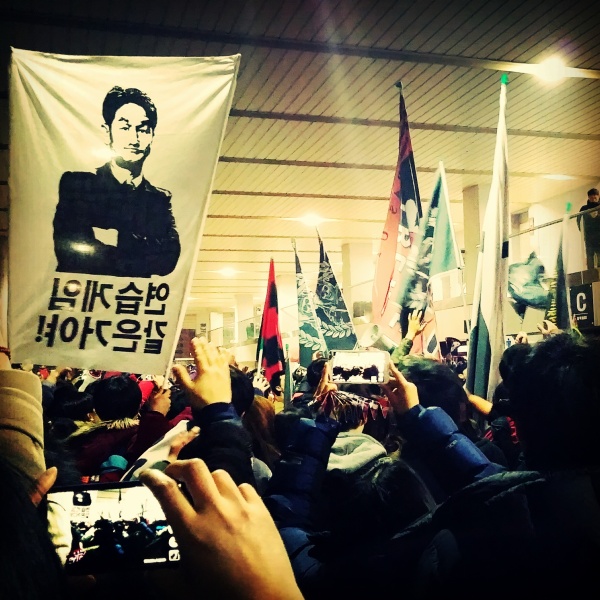 In the year of Sheep/Goat FC Seoul hoof Hanoi.

It was eventually here, the first competitive match in three months as FC Seoul lined up against the Vietnamese champions Hanoi T&T, although when I say “competitive” it turns out I was using that term loosely as what was about to unfold was anything but.

Hanoi had earned the right to play Seoul by easily dispatching Indonesia’s champions Persib Bandung 4-0 in the preliminary round. Even though they had cruised through the previous round on paper they really shouldn’t have been a match for Seoul but as we know games aren’t played on paper and it was a game that Seoul weren’t going to take lightly.

I had managed to secure a day off on Tuesday and so after a relaxing morning/afternoon I made my way to Noksapyeong Station to meet the first of our group. Seoul is still in the middle of a cold snap so a night of cold beers and cold hands lay ahead. We arrived at the stadium just before 6pm, some 90 mins before kick-off, and got ourselves sorted at the now familiar setting of ‘the rocks’ for our pre-match beer. We were soon joined by the remaining two members of the group and talk turned to the game, the wives (not mine) and the integrity of both chaebols and horse racing.

As we entered the stadium it was as deserted as we predicted with an official attendance of 6700 announced which in itself looked a tad optimistic. Midweek games in Korea are rarely that busy due to long working hours and with the added freezing weather it wasn’t surprising that this one was quiet.

There was no real surprise in the Seoul lineup, Osmar, Everton and Escudero all started with Molina the only real noticeable absence although not surprising as he usually comes back from the close season a little ‘larger’ let’s say. Yun Il Lok and Jung Jo Gook completed the attacking options for Seoul and they would go on to have a huge say in the outcome of the match.

It didn’t take Seoul long to settle into their stride and after only about 13 mins you could sense it would be a long night for the visitors when Yun Il Lok picked up a ball on the left hand side of the box, took one step forward and smashed a shot beyond the hopeless and hapless Cong in goals. This was to become the pattern for the night and it got to the point where even bending down to get a beer resulted in missing either a goal or at least a chance. Seven minutes later and with the Seoul fans still celebrating it was 2-0. A good move outside the box resulted in a deft flick towards Everton on the penalty spot, it was behind him so he decided to try an acrobatic overhead kick. His effort cannoned off Daniel in defence and he seemed to backhead it over his keeper and into his own net. The goal was so comical that it was met mostly with laughs from the Seoul fans, never a good sign for a team obviously devoid of confidence. Hanoi amazingly held out for another 10 minutes but were beaten by probably the best goal of the night. A great ball beyond the defence by Kim Chi Woo was picked up by Jung Jo Gook who with a fantastic first touch created space and slipped the ball beyond Cong into the far corner. Jung is called ‘The Patriot’ due to the accuracy of his shots and as the stadium rang out to the sounds of “Jung Jo Gook The Pa-tu-ri-o-tu” it was looking just a little too much for the poor Vietnamese players. There was still time for Seoul to add a fourth before half-time, Escudero with the simplest of tap-ins but the most elaborate of celebrations. It turns out this was his last outing in the colors of FC Seoul as he will move to China this week which might explain his halfway line dash to hug manger Choi. With the half-time whistle came some messages of love and thanks for Cha Duri at which point I escaped and decided to risk a hotdog. Neither were particularly tasteful.

As the second half started much of the talk was about whether Seoul would keep going or whether they would ease up, it took one minute to discover the answer and it was Jung Jo Gook who answered. He picked up a simple pass forward on the left wing, cut inside and curled a fantastic shot beyond the keeper, I was beginning to wonder if there might be something in this ‘patriot’ malarkey. With Escudero leaving and Everton inconsistent Seoul might just need to rely on him to be the difference this year. The rest of the match was much as you would expect it, the more Seoul attacked the more reckless the visitor’s tackles became. With Daniel eventually booked in the 70th minute for an ‘assault’ on Cha that almost saw Cha booked for retaliation. Cha has become somewhat of a cult figure since last summer and the challenge from Daniel was met with some passionate rebukes from the crowd, including a reference to Cha being “God”. There was still time for more drama at the World Cup Stadium including a debut goal for Lee Seok Hyun to make it 6-0 and a ridiculous fumble by Cong to allow new Seoul captain Koh Myong Jin to poke home from 3 yards to complete the rout. 7-0 was the final scoreline but in fairness it could have been 12 and nobody would have been surprised.

As we left the stadium the Seoul fans gathered in the concourse in what has become a traditional celebration after an important victory. Banners were waved, songs were sang and there was even a banner celebrating manager Choi which is slightly surprising as he’s not known as the most popular of managers. We left the celebrations to make our way back to Mapo and the comfort and warmth of some barbecued meat and a few bottles of Soju. A good evening was had and although Seoul won’t get many easier games this season (well apart from when Incheon United come to town) it was a good run out for the players and sets them up for some tasty Champions League ties against Western Sydney Wanderers and Guangzhou Everlande, the later first up away next Wednesday.

Took Eòin to his first ever football game. Was something I've dreamed about for as long as I can remember. An amazing day out even though we lost. A special mention for the @incheonutd security staff who were just amazing with him, especially the one who kinda played peekaboo. Brilliant day, brilliant fans and yet again the @yfboys2011 deserved so much more. #kleague #Korea #football #seongnamfc #proud #prouddad #proudfather #daddyandsontime #dad #parenthood #성남 #축구
Back in HBC today. Pizza, beer and a bit of work at @8piece_pizza #Korea #beerstagram #beers #beerlover #beer #craftbeer #alcohol #drinking #drinkstagram #pizza #pizzalover #foodstagram #food #working