2015 was going to be the year that witnessed the return of Seongnam FC to their old stomping ground of the ACL. It was a year in which Seongnam cut all ties with previous incarnations and shelved the ‘traditional’ yellow kit in favour of an all black number. It was going to be a year of stability on the pitch built  by the rock-like figure of Kim Hak Bum in his first full season in charge after answering their SOS call at the end of 2014. It also saw the return of prodigal son Kim Do Heon, who was welcomed back into the Seongnam family much like an ESL teacher returning home for their first Christmas vacation. With all these factors in play it was always going to be a season to look forward to for the much maligned fans from Yatap. Would it prove to be successful or would it all end up being as big a letdown as an all you can eat buffet in Seven Springs?

It had been 2012 since Seongnam had last graced the ACL in a campaign in which they fell in the last 16 at home to Uzbek champions Bunyodkor. 2 years might not seem a long time for most clubs but given Seongnam’s dominance in the K-League in the early 2000’s it had been given a little more significance. They had qualified for this year’s tournament courtesy of winning the FA Cup via a penalty shootout over FC Seoul and thus had become the first ‘citizens’ club to represent Korea in the tournament. Not much was made of their chances before the draw was made and those slim hopes became even slimmer when they were paired up with the Japanese and Thai champions in Gamba Osaka and Buriram and also Guangzhou R&F (Evergrande’s poor cousins). The campaign did not start well as they succumbed to a 2-1 defeat in Thailand in a match best (or worst depending on your point of view) remembered for some horrendous defending from the visitors. It was a game which was met with some unwarranted, and at times over the top, criticism for Kim Hak Bum’s men although this might just have spurred them on to prove everyone wrong.

The group stages would go on to be a success for the club as “Fortress Tancheon” rightly earned its moniker with Seongnam defeating both Gamba and Buriram either side of a 0-0 draw with R&F. It was this home form plus a rather unexpected away victory in China that resulted in them being the first Korean team to qualify from the group stages. An away defeat in Japan didn’t dampen the spirits of the Seongnam faithful who were beginning to believe they could defeat anyone on their home turf.

That late defeat in Japan  had set them up with a mouth-watering knockout stage clash against the big-spenders of Evergrande. It was a huge task to expect them to defeat a team which boasted an array of ‘superstars’ and was managed by Fabio Cannavaro. The first leg was in Tancheon and was probably one of the best atmospheres that I have experienced in Korea as Kim Do Heon’s last minute penalty hit the back of the net to give the home side a 2-1 lead going to China. Unfortunately it wasn’t enough and Evergrande ran out 2-0 winners at home to win 3-2 on aggregate. Seongnam may have been out but they had proven a lot of people wrong and earned a few more fans along the way. Evergrande would eventually go on to win the final without losing another match which again highlighted just how huge that victory at Tancheon was.

2014 had been something of a ‘annus horribilis’ for Seongnam. They had managed to go through managers quicker than I go through bottles of Soju in a tent in Yeoudio of a Friday evening. Kim Hak Bum had come in at the tail end of the season in a desperate attempt to both steady the ship and ultimately preserve their K-League Classic status which was perilously close to being snatched from them. Nobody really knew what 2015 would have in store for Seongnam and indeed probably even the most optimistic of fans wouldn’t have predicted any form of success. The season started with a trip to Jeonbuk and a defeat at the hands of the team most were picking for the champions before a ball was kicked. Things soon started looking up for Seongnam though and they spent most of the first twenty or so matches in and around 5th~7th. The league was so tight though that any slip ups and they could end up as low as 10th. In the final half of the season  Seongnam ensured their place in the Championship Group after the split with some huge victories. They had performed well against the so called “big” teams and in fact you wonder that even if Ulsan hadn’t had a nightmare middle of the season would it have been Seoul or Jeju making way for them instead of Seongnam.

Unfortunately for Seongnam fans if the middle of the season had seen them reach such highs as away victories over Incheon, Suwon and the hoodoo breaking Seoul victory it was to be the final straight of the season that would bring them heartbreak. Having made the Championship Group (and in fairness looking one of the better sides in it) they then shot themselves in the foot and tearjerkingly fell out of the ACL spots and finished 5th.   As Adriano was wheeling away in celebration after netting Seoul’s last gasp winner in a match that Seongnam should have put to bed you got the sinking feeling that it was all going to unravel quicker than a pair of Calvin Klein boxers bought on Itaewon Main St. Three  draws in a row quickly brought any dreams of another year in the ACL to a shuddering halt and left the fans with a real feeling that they had been pick pocketed. Suwon were not a great team, Seoul were inconsistent and really only Pohang had shown over the season that they deserved to finish above the boys in black. Finishing a season that at one point had promised so much with nothing to show was a tough one to swallow, even for the most pessimistic of fans. They did rally and win the final game of the season, a 2-1 home victory over Jeju but in the end it was a season that promised everything and delivered nothing much like a blind date in Jongno.

FA Cup back at Tancheon.

Over the years Kim Hak Bum has molded a reputation as being a bit of a cup expert with last year’s FA Cup success cementing the idea although this in turn seemed to heap huge expectation on his shoulders of a repeat success in 2015. The draw for the last sixteen matched Seongnam against Yeungnam University in a repeat of the 2014 Quarter-final which Seongnam had won 2-1. It would take a similar scoreline again to see the boys from Tancheon progress to the last 8 although this time those plucky university boys took their top-league rivals to extra time. It was not a great performance from Seongnam and as the fans made their way back to the subway amidst the news that Ulsan at home were next up there weren’t too many happy faces.

The pessimism on that June evening after the Yeungnam match was to be justified when at the end of July Ulsan sent Seongnam crashing out the cup. Again the match went to extra time after former player Kim Tae Hwan had opened the scoring only to be cancelled out by the ever-improving Hwang Uijo. In the end it took a world class strike from Ulsan’s Croatian midfielder, Ivan Kovacec, to separate the teams. Losing a match to Ulsan wouldn’t normally spark the wailing and gnashing of teeth normally reserved for losing 5-1 to your rival but considering the horrendous season Ulsan were having at this point it was a match that could have and should have been a Seongnam victory.

And so it was all over, there would be no repeat of the scenes at Seoul World Cup Stadium when Park Jin Po lifted the FA cup into the Seongnam fans, no more would the trophy sit in Yatap Station. (still can never imagine this happening in Glasgow) In truth it was a poor defence of the trophy by Kim’s men and something the Seongnam masses wanted to forget quickly.

If all eyes were fixed on the return of Kim Do Heon it was a player already in the squad who was going to make all the headlines and then some. Hwang Uijo had been regarded as something of a ‘super sub’ in 2014, making only 13 starts with 15 cameo roles from the bench but 2015 would go on to become something of the “Wee Joe Show”. Goals in the K-League Classic (15) were supported by a goal in each round of the FA Cup (3), plus 2 goals in the ACL Group Stages. He was fast becoming one of the most talked about strikers in Korea and along with Joo Min Kyu at Seoul E-land was being hotly for a National Team call up. Initially Uli Stielike seemed to be oblivious to Hwang’s goal-scoring exploits and continued to overlook him for squads. He eventually did enough to catch the German’s eye and made his international debut against Laos in a ridiculously one-sided World Cup qualifier. It wouldn’t take him long to break his international duck  and so it was that he scored in mid-October in a friendly match against Jamaica. The only way is up for Uijo and it is no surprise that speculation linking him with moves overseas are growing pace. He has an amazing eye for goal and although frustratingly selfish at times if he can work on this side of his game I have no doubts he’ll go on to be a wholesale name outside of Korea….but hopefully not for a few years yet!!

And so there you have it, Seongnam Fc 2015 all neatly reviewed and wrapped-up. It was a season with more twists and turns than a Donegal country road, more ups and downs than a KBS drama. It brought moments like Kim Do Heon’s winning penalty against the richest team in Asia, Nam Jun Jae slaying Suwon in the Big Bird and breaking the Seoul World Cup Stadium hoodoo with that amazing strike from Park Yong Ji. It unfortunately vomited up moments like Adriano’s last -gasp winner at Tancheon, a hugely controversial penalty for Jeonbuk’s very own ‘Diving with the Stars’ Lee Dong Gook and of course coming so close to the ACL next year and throwing it away. But when all is said and done it was a good year, it took me to Osaka, let me sing in a monsoon in Incheon and there might just have been a beer or two consumed along the way. 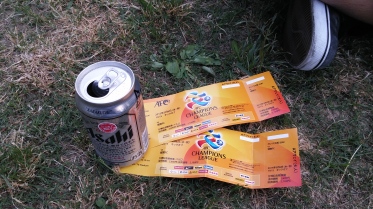 Singing in the rain at Incheon