A Trip to Suwon : A Birthday, A Tenor and Some VAR

When faced with the task of getting the missus a birthday present that she’ll remember for a year some men think of bling, pefumes or hopping on a plane. For me I plumped for a bus ride down to Suwon and taking her to Suwon Bluewings v Ulsan Hyundai….and they say that romance is dead. In fairness she is something of a closet Bluewings fan and there really are only so many Seongnam matches that you can put someone through before they crack. And so it was then that we gave an afternoon of eating desserts in a coffee shop the cold shoulder and headed off to watch the ‘top six’ clash.

The day started, as so many trips to Suwon do, with a mad dash to Sadang Stn to get the Express bus to The Big Bird. You’d think that after years of making the same journey I would have stopped being surprised by the time it takes to navigate the sprawling underground collection of pop-up stores and hiking ajossis that is Sadang. The bus was caught on time and obviously the bus driver was a Bluewings fan as he drove like a man with a promise of beer and the game on TV in a local Hof. Some 30 mins later we successfully secured tickets and a pack of Cass and were plumped outside The Big Bird Cafe soaking up some October sun and waiting on the match.

The Big Bird Cafe….the highlight of any Suwon trip!

There are fewer better stadiums to be in Korea than The Big Bird and when you throw in some autumn sunshine it really is a fantastic place to watch football. We were a little late in getting in to the ground due to a new ‘bag-search’ being implemented, I can only imagine that this is due to the recent bottle-throwing exploits of some disgruntled Suwon-istas at the recent ‘Supermatch’. One of the best things about the K-League is the ability to have a cold beer while watching your heroes, or villains, and it will be a shame if this is affected going forward.

The game started with both teams looking like they were “up for it” and chances were created at both ends as both teams had so much to play for. Suwon knowing that rivals Seoul were snapping at their ankles for the last ACL place and Ulsan still with a hopeful eye on league leaders Jeonbuk. The match is also, almost certainly, going to be the FA Cup final clash, Ulsan already booking their place after defeating Mokpo and Suwon facing Busan in the other semi-final. The game was being played at a pretty fast pace and there was a feeling among the fans that it was more a case of when not if the deadlock would be broken. It didn’t take long for those feelings to become reality and it would be a rather unfortunate Lee Young Jae who would open the scoring as he slid the ball into his own net after a harmless Park Ki Dong shot ricocheted off the foot of Richard and into his path. As if the blunder wasn’t bad enough he then had to endure ‘OG’ next to his name on both the giant screens for the rest of the 90 mins.

The first half also provided me with my first live experience of VAR as play was halted just before half-time although quite why it was paused escaped me as the action had taken place on the far touchline in the middle of the pitch. It seemed needlessly unnecessary to me, although it would be put to proper use later.

It was a beautiful day down in Suwon.

After a pretty decent first half in the sun things took a little turn for the surreal as Britain’s Got Talent winner and tenor Paul Potts graced the field to give us a rousing rendition of Nessun Dorma. He had actually taken the ceremonial pre-match kick-off which I missed due to having to queue to heat a rather hastily purchased hot-dog. He came out dressed in a Suwon shirt and preceded to give us a rather rehearsed “Suwon Fighting!” before breaking into song. To be fair the boy can carry a tune and although he didn’t exactly have the crowd locking arms and humming along it was a powerful rendition. After singing he toured the pitch (well the Suwon ends) and kicked several match ball into the crowd before exiting the field and no doubt necking a cold Cass on the way back to his hotel.

The second half started much like the first with both teams active but there was a definite spring in the Bluewings step, they are undoubtedly a different team with Johnathan back and they were now playing with a belief and an air of confidence that has been missing of late.  Speaking of “missing” there was of course no starting slot for Matt Jurman as the big Aussie was serving a two game ban for making a “gesture” towards Jeonbuk’s Lee Dong Gook in a previous match. At the start of the 2nd half the Bluewings “ultras” unveiled a message of support for him which roughly read “Matthew we are with you”. He has become something of a cult hero this year and will unfortunately miss ‘The Supermatch’ before returning to the starting lineup again.

The Suwon fans with a message of support for Matt Jurman

As both teams continued to search for the goal that would change their afternoon’s fortunes the ball broke to Johnathan who sprinted into the box and just as he was getting ready to pull the trigger was brought down. It looked a clear-cut penalty from where I was sitting, exactly level with the tackle, but it was waved away by the referee who implied the Ulsan defender got the ball. That call was directed to VAR and after a brief review the penalty was awarded and duly converted by the talismanic Johnathan who got a yellow card for his shirtless celebrations, I personally would have given him a yellow for flapping around with his top like Mario Ballotelli with a training bib.

Time for another VAR interruption!

With Suwon 2-0 up they were able to sit back and soak up the Ulsan pressure and even though Shin Hwa Yong was called into action a couple of times it was a comfortable victory in the end for the hosts. Things could have been different of course had Daniel Subotic not hit the post when clean through on Shin and he really should have burst the net instead of trying to place it in the corner. There was still time for Richard to flash a free header past the post as the visitors began to run out of ideas and the Bluewings fans erupted into a rather ironic chant of “Goodbye” (a play I imagine on the famous Ulsan chant). 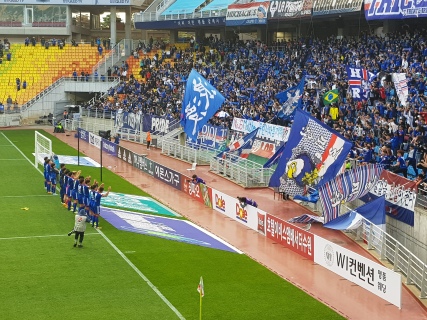 The Suwon players take the salutes of their fans.

After the full time whistle we walked round to the North stand and watched as the Bluewings fans broke into a celebratory rendition of Despatchio to hail their heroes and a huge 3pts. For us all that remained was the bus back to Seoul and for me to start planning which game to take the wife to next year….

The full highlights can be found here : https://www.youtube.com/watch?v=BbQRs0bROaU&t=121s