And so it’s been a long hard and, for some, an arduous road but the final weekend of the K-League One is here. Last weekend we witnessed something nobody could have predicted in March as Jeju were officially relegated from the top division, that they crashed out in another example of shocking defending only served to highlight how awful their season has been. 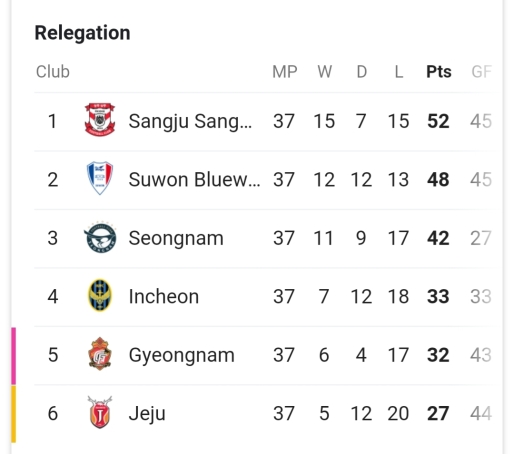 The Relegation Group going into the final weekend!

That Jeju result leaves us with only one game with anything at stake for the bottom teams as Gyeongnam host Incheon in a winner-avoids-the-playoff clash. And so it is that at 3pm on Saturday many an eye will be cast Changwon way.

Gyeongnam come into the game on the back of a rather fortuitous away win against Seongnam FC last weekend as they somehow managed to turn an almost certain draw into a win courtesy of a heavily disputed Deric penalty. They had, by far, the best of the opening 20 mins or so of the game but once Seongnam woke up they looked, not for the first time this season, ropey at the back. Seongnam had chances to win the game at 1-1 but were wasteful in front of goal and when you have players such as Kunimoto and Deric you will always create and finish half-chances. Gyeongnam must wish every game was against Seongnam as they have taken 10 points from 12 from The Magpies this season, in Incheon though they face a team with the bit between their teeth.

Incheon defeated the Army team last weekend to keep themselves 1pt above Gyeongnam going into this weekend as Olanrewaju Kehinde picked the perfect time to notch his first goal for the club as he scored the vital killer second goal in the 2-0 win. Incheon have, of course, been here before and have an amazing knack of always pulling victories out of the bag when they need them, this time however they only need a draw and psychologically that might make all the difference as teams like Incheon often need to be under pressure for their fans to get the best from them. Speaking of their fans, an absolutely incredible 11,463 paid to watch the game and that alone is enough for most neutrals to want them to stay up, it certainly seems enough for Shinhan Bank to be rumored to have shown an interest in buying the club.

The last three games between the clubs have finished as two draws and one Incheon victory, either result would see United secure their place in the top flight next year and send Gyeongnam into the playoffs against Busan or Anyang.