Week 2 of the K-League grew attention far and wider yet again as Sangju surprised everyone with their win over Gangwon while Jeonbuk surprised nobody as they defeated Busan with another late goal. We did of course make headlines worldwide yet again although this time it was for off the pitch action as FC Seoul misunderstood the concept of their fans “getting dolled up” for a game. This week’s games sees the return of Friday night football and it should be a cracker as Pohang welcome Seoul to town.

Serbian midfielder Paločević scored for the second time in as many games as Pohang continued their impressive start to the season as they drew 1-1 away to Daegu. They were leading at half-time but were denied all three points by a 67th minute Edgar Silva header. Australian midfielder Brandon O’Neill made his debut after being benched the previous week and a run of starts for him can only help the K-League keep the attention of all those football-starved A-League fans back home. Palacious came off the bench and Pohang fans will be hoping he can find his feet soon and start looking like powerful striker he was at Anyang.
After losing to Gangwon on the opening day, Seoul recovered to beat Gwangju at home with Han Chan-hee scoring the game’s only goal. They were far from impressive in the victory but then again Seoul have always been notoriously slow starters in the league and with Adriano finally making his first start since his close season move he might just be the spark they need. They do look a little slow in the build-up and this is something manager Choi Yong-soo will have to address if they are to compete for the Asian Champions League slots. Pohang are probably their main rivals for 3rd place so when better to start.
Pohang have won the last two meetings with a Paločević double helping them on the way to a 3-0 win last time. This one should be closer but it could come a little too early for Seoul.

After that scintillating opening day performance against Seoul that garnered the name “Byungsoo Ball” (read The Tavern’s article here) , Gangwon disappointed the neutrals as they fell to a 2-0 loss away to Sangju Sangmu. They did continue to play the good football of the previous week but they were far more wasteful in front goal and seemed to be too easily caught by Sangju’s quick counter attacks. Lee Hyun-sik was lucky to be one of only two yellow cards for Gangwon as the visitors grew more and more frustrated in the 2nd half. They have a pretty strong squad and it will be interesting to see if they swap a few players around this week with names like Ko Moo-yeol and Kim Ji-hyun itching for a start.

Seongnam FC started the season with that 2-0 win against Gwangju and have yet to concede after they were held to a goalless draw last week by an Incheon side which played as if they has several buses parked across the halfway line. Hero of the opening day, Kim Do-hyeon really should have been the hero again as he had a couple of opportunities to score, with one chance in particular falling into the ‘gilt-edged’ category. They had an incredible 73% possession in the 2nd half but just couldn’t find a way past that stubborn Incheon defence, you imagine they’ll have nowhere near that percentage against “Byungsoo Ball”.

Gangwon have been something of Seongnam’s bogey team the last few years and it would surprise many if they didn’t continue to frustrate The Magpies this week.

Last week Suwon Bluewings threw away a two-goal home lead against lead leaders Ulsan FC at the Suwon World Cup Stadium as they collapsed in the 2nd half with most of their players practicing ‘social distancing’ from the ball. They led through goals from Ko Seung-beom and Sulejman Krpić, who looked assured on his debut , with Ko’s goal being a pretty sweet strike. Bluewings looked good until Ulsan scored after which they completely disintegrated and it must be a concern for fans and players alike at just how easily they lost the game. Last year’s top scorer Adam Taggart was dropped to the bench and he looked beyond angry when he came on for Han Eui-gwon on 60 minutes.

Incheon United seem to have adopted a more defensive approach this year and against Seongnam looked almost scared to cross the halfway line, especially in the 2nd half. Rashid Mahazi has impressed with how he’s handled players such as  Cesinha and Yang Dong-hyen and, if giving the chance, will relish adding Taggart to his back pocket collection. While they can be proud of their backline they must be concerned by the fact they are one of only two teams still to score in the league with newly promoted Gwangju the other, unless their ‘modis operandi’ is to just not lose all year.
There has been only the solitary 0-0 score in this fixture in since 2009, we surely aren’t going to see another this week are we?

Sangju were like one of those Extreme Makeovers last week as they bounced back from a 4-0 hammering at the hands of Ulsan to put Gangwon FC to the sword on Saturday. Their fans surely feared the worst when Moon Seon-min was dropped to the bench but it must have been the kick up the arse he needed as only 3 mins after coming on he scored a goal that ex-Seongnam hero Tiago would have applauded. Intercepting the ball at an opposition corner he ran with it almost the full length of the pitch before calmly placing into the bottom corner past Lee Bum-soo in goals. That made it 2-0 after an earlier Kang Sang-woo penalty had fired the Army in front, an extreme difference from the previous scoreline indeed.

Gwangju have not had the best of starts to K1 life as they followed up that defeat to Seongnam with a 1-0 defeat to FC Seoul.  They barely laid a glove on the Capital side, managing just one shot on target in a game that never really got started. They came up last season with a lot of hope, and perhaps too much hype, but unlike Busan don’t really have anyone else to blame for the poor start. Felipe really needs to start getting more, and better, service if he is to lead their campaign to keep their top table place.

The teams haven’t met since 2017 when Sangju won three of the encounters, on 2020 form you can’t see that dominance changing. 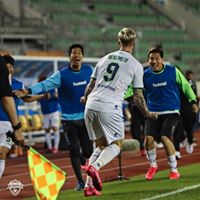 Jeonbuk maintained their 100% start to the 2020 season with a last gasp 2-1 victory over Busan in the final game on Saturday night in what was another unimpressive performance from the Champions. They started well and took the lead through Hong Jeong-ho but as the game went on they were pinned back by the “new boys” and there could be no complaints when Romulo opened his K-League One account from the spot. Just like last week it was a substitute who would earn them the 3pts as Lars Veldwijk came off the bench and grabbed the winner. This just goes to highlight the depth in squad that is available to Jose Morais who boasts a bench most teams would love to have in their Starting XI, but question marks do continue to remain over how they’ll handle one of the league’s better teams.

Daegu started 2020 with a disappointing 0-0 against Incheon and were probably on the fortunate side to grab a 1-1 draw against Pohang last weekend and they look a shadow of the team that have been most people’s “second team” the last couple of years. They are beginning to look very one-dimensional and teams seem to be able to control them easily as they man-mark Cesinha. K-League legend Dejan has come off the bench the last two weeks and Daegu need to either get him starting or find a way of supplying him when he does come on as he will always find the net.
Jeonbuk have won more than 50% of the fixtures down the years, don’t be surprised if they snatch victory in this one with a late flourish.

The last match of the weekend features the most impressive side in the K League 1 this season as Ulsan play host to Busan in a local derby. They come into the match on the back of that incredible comeback against Bluewings and are looking every bit the team capable of prising Jeonbuk fingers off the league trophy. Junior scored his second brace in two games as they ran all over Bluewings in the 2nd half. Lee Chung-yong was fantastic in what looked like a free role and hurt the opposition time and time again. I may be getting carried away but this Ulsan team do look unstoppable.

Busan remain pointless despite more than matching Jeonbuk for large periods of the game last week and can surely take some positives form the loss. Romulo’s penalty was well-taken and they showed a lot more fight and spirit than they had done the previous week at Pohang. You have to feel sorry for the boys from down South as they have had the almost impossible task of facing arguably the best three teams in the league in their first month back in the top division, I guess looking on the bright side it can only get easier after this week.
Ulsan, as expected, have had the upper hand in the derby clash losing only one of the last ten.