It’s almost that time of the year again when hopes are built, dreams created and expectations elevated all for it to come crashing down mid-summer as Jeonbuk inevitably extend their lead at the top of the table and, for myself, Seongnam lurch from one poor performance to the next. I am of course talking about the new K-League season and this year along with the new faces, the new managers, the new strips, the plethora of previews, we also have a honking new logo that looks like it was designed in one of those ‘rehabilitation’ classes you see on ‘The World’s Toughest Prisons’. So it’s safe to say there’s a lot to look forward to as we embark on another year of drama and debate the likes that only Korean football can provide, below I list the 5 main things I think Korean fans both hardened and uninitiated need to watch out for.

Did Seongnam spend big on their foreigners?

Kim Nam-il had, without doubt, a roller-coaster of a debut season as a manager as the hugely experienced player found himself on the wrong end of too many novice managerial mistakes. A season that started incredibly was soon inexplicable as he lined up against a woeful Bluewings team with no striker before it became indefensible as they lost 2-0 at home to Gwangju in the last match before the split, a game that victory would’ve sealed a ‘top 6’ place. Intolerable came next at they got skelped 6-0 by Incheon before indescribable as Hong Si-woo inspired a 2-1 comeback on the final day that kept Seongnam up and relegated Busan. The Magpies were mere minutes away from relegation before Ma Sang-hoon fired home to give Seongnam the 3pts they needed to survive.

One of the things that equally angered and puzzled Seongnam fans was Nam-il’s use, or lack of, of his foreign players. They had Iskanderov, who in my opinion is a fantastic footballer, who Nam-il unceremoniously dropped midway through the season. Then there was Tomi who scored against FC Seoul and Bluewings but was barely given a chance to show if he could be a consistent performer. And of course finally there was the enigma that was German defender Igor Jovanovic, I think I managed to see more live football than he did in 2020 and I felt like James Caan from Misery for most of the year. It is therefore hard to believe that Seongnam would shell out anything on a foreigner nevermind a combined total of €500,000 but allegedly that is the case. It will be interesting to see how Kim deals with players like that who the board as well as the player himself may very well expect to be named in most starting XIs.

After four long years in the K-League 2, Suwon FC are back among the big boys after clinching their spot with a ridiculously dramatic 93rd minute An Byong-jun penalty against Gyeongnam FC. An has since left Swuon for Busan and that was only just one of an outrageous number of ‘ins and outs’ that has seen almost the whole 2020 squad shipped out and replaced. Korean football feels like it has one of the highest player turnovers in the world but Suwon FC’s transfer business this year has shocked even the longest serving fans out there. But that being said it is not without logic, this is not merely the usual throwing darts at a bunch of Panini stickers and hoping they gel as a large number of their signings have a little bit of a Hyundai feel to them. As avid Suwon fan, @chiefinkorea pointed out there is a definite Ulsan FC connection now, stemming from the GM to the coach to their signings with Han Seung-gyu, Yun Young-sun and Park Joo-ho all joining this year. It is a huge gamble replacing so many players but with so many knowing the manager and each other it could turn out to be a stroke of genius. One thing is for sure, Suwon FC are determined not to bounce back down to the K2 without a fight…..Seongnam, Incheon and Gwangju better take things as seriously.

Follow ‘The Chief’ for all your Suwon FC news

For as long as I’ve been in Korea there has always been talk of what impact the return of the Korean footballing heroes of Ki and Son would have on K-League interest levels. Ki returned last year amidst COVID so we won’t see his impact until this year while Son tried everything he could to never have to grace a K-League pitch…..actually that’s not true he hid behind tears and “nerves” while players like Hwang Uijo got him out of his military service. The biggest question though has always been what would a Park Ji-sung “return” bring to the league, well that question is about to be answered as, much to the dismay of most K-League fans, Park has taken up an ‘advisor’ role at Jeonbuk Motors. It’s kind of like seeing the girl you really liked in high school 10yrs later in a pub with the local drug dealer (trust me it’s the EXACT same feeling). Park, of course, has never actually played in the K-League so it’s not like he had any real ties with a club here but it was still disappointing to see him take up a post with the team that bludgeons the league into title submission year on year….although let’s be honest it would have been much worse had he joined FC Seoul.

The sight only Jeonbuk fans wanted to see!

It’s been a strange time of late for fans of Pohang Steelers, from league and cup winners in 2013 to flirting with relegation in 2016 they finally clawed their way back into the ACL last season only to see the players that arguably got them there leave as Ijutcenko and Palocevic joined Jeonbuk and Seoul respectively. Like with Tiago a few years back when his parent club loaned him to Seongnam after a good season with Pohang, it looks like Palocevic has been sent to Seoul by his owners. The loan system has it’s plus points obviously but it’s a system, especially in Korea, which really doesn’t help fans create bonds with players as fans never really know who owns their heroes. The Steelers do still have big game players such as Song Min-kyu and Palacious on their books but the loss of especially Iljutcenko will be a tough one and it wouldn’t be unimaginable to see them slink back down the table again and heap more misery of a fanbase who’s only real highlights of late have been stopping Ulsan winning the title.

There’s only one stadium in Suwon!! 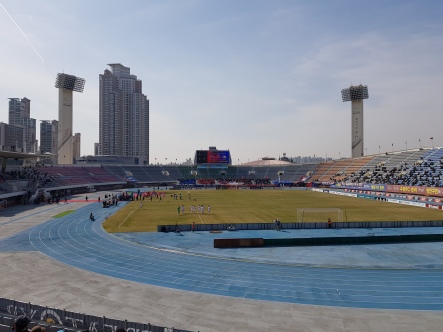 Back in 2014 as Suwon FC were still in their pre-adolescent years they played their games in Suwon World Cup Stadium before making the permanent switch to the Suwon Sports Complex in 2015. I remember being at a home game versus Bucheon FC which had a ‘no singing’ policy due to the recent Sewol tragedy and it was a strange affair indeed having been in the ‘Big Bird’ on many an occasion to cheer on ‘anyone but Bluewings’. Back then the Bluewings fans were larger in number and louder in voice and so it was incredibly surreal to be there with literally no fans and zero atmosphere. In 2015 Suwon FC made the aforementioned move and have made the Civil Stadium their own…but all that is about to change again as from July this year they will groundshare with their Suwon rivals while ‘renovation work’ gets carried out at the Sports Complex. There have been permanent groundsharing noises made in the past from various council members desperate for election. A couple of years back Seongnam split their season between the Seongnam Sports Complex (“Moran”) and the Tancheon Sports Complex, with them probably playing better at Moran that year so it will interesting to see both how results go for Suwon FC and just exactly how long the ‘necessary renovations’ end up taking.